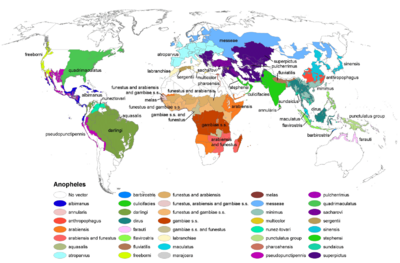 distribution of some important Anopheles species (click on image to enlarge it)
Source: US-CDC Wikimedia Commons

This is a large genus with almost 500 species of mosquitoes and a world-wide distribution. The species are found in tropical, subtropical and temperate regions, with the exception of most of the Pacific islands. The distribution of most species is restricted to certain environments, type of breeding sites and their preference for certain groups of hosts.

Due to the large number of species involved, there have been attempts by taxonomists to subdivide the genus Anopheles into smaller units. Most commonly used is the subdivision into subgenera, species groups and subgroups, as well as species complexes. These involve progressively fewer species, in the above order.

The genus is well known for its ability to transmit malaria agents (Plasmodium falciparum, Plasmodium vivax and other species) and around 50 species are known vectors of human malaria, especially species of the subgenus Cellia. Other human diseases like filariasis or encephalitis are also transmitted by some species. They are further vectors of various animal diseases.

The most important malaria vectors are as follows:

Africa:
A. arabiensis, A. coluzzii, A. funestus, A. gambiae,

Eastern and south-eastern Asia:
A. dirus, A. maculatus, A. minimus

Western Asia:
A. culicifacies, A. stephensi

See also the US-CDC map on the top right. For other species see the list below.