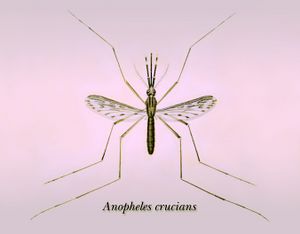 This mosquito is found in parts of North and Central America, including Cuba and Jamaica. It bites humans during the night, but mainly outdoors. A. crucians has been found to occasionally carry the malaria agent, but is not regarded as a significant vector. On the other hand, it is regarded as a vector of the eastern equine encephalitis virus as well as other viruses, including the West Nile virus or the LaCrosse virus.

A. crucians breeds in ponds, swamps or lakes and seems to prefer breeding places with vegetation and with acid water. Taxonomically, A. crucians is regarded as a complex of several closely related species (e.g. see Wilkerson et al., 2004). This complex includes, for example, Anopheles bradleyi.