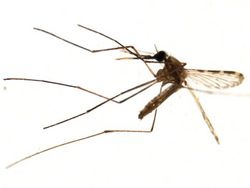 This mosquito is found in southern Asia from India to southern China, including Indonesia in the south. It is regarded as an important malaria vector in Thailand, Malaysia and Indonesia. It breeds in rice fields, swamps and shallow pools. Bovids are the preferred hosts, but it also bites humans readily.

Taxonomically A. aconitus is a member of the Anopheles funestus group and is similar to Anopheles varuna.