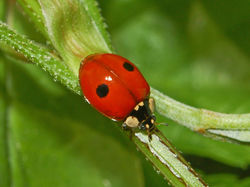 This species is small ladybird beetle (about 4-5 mm long) with a holarctic distribution. It is a general predator, feeding mainly on aphids and is commercially produced. In Europe, it has been previously very common, but has been replaced in many areas by the invasive Harmonia axyridis. Five years after the introduction of that species, populations of A. bipunctata had declined by about one third in Belgium and the U.K. (Sloggett, 2017).