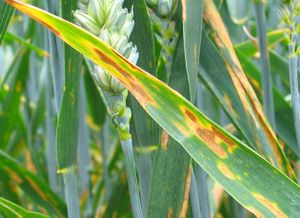 The fungus is widespread in temperate regions and causes Septoria tritici leaf blotch, a serious disease of wheat under humid conditions. It can also infect other cereals (e.g. oats, f. sp. avenae) and grasses. On wheat it can cause substantial yield losses, up to 50%, in susceptible cultivars. The fungal spores enter the leaf through the stomata. Symptoms start within 2-3 weeks with small yellow spots which enlarge to diffuse, yellowish-brown blotches on the leaves with tiny dark-brown to black fruiting bodies embedded in these lesions: pycnidia producing conidia and perithecia containing ascospores. Eventually the whole leaf dries up.

The conidia disperse through rain splashes over short distances whereas the ascospores dsperse over longer distances by wind. Between seasons, the fungus persists in plant debris or infected seeds. The disease is usually managed by using resistant cultivars.

The asexual pycnidia are elliptical, about 90-150 µm long and produce conidia of variable length, about 30-80 x 2-3 µm large, and with 3-7 septa. Microconidia, about 6-10 x 1 µm in size, have been also reported. The sexual perithecia are spherical, about 70-100 µm in diameter, with elliptical ascospores, about 9-16 x 3-4 µm in size, containing two cells of unequal length.