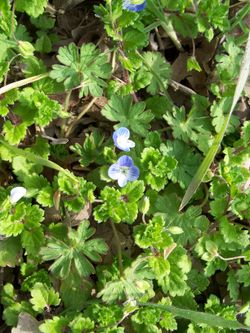 This genus contains around 200 species of herbaceous plants, some are also shrubs or small trees. Some have medicinal properties, but several species are considered to be important weeds in temperate regions which affect crops like cereals and vegetables or turf. For example, Veronica arvensis or V. persica are weedy species.

The plants are usually low growing with small flowers that are often blue and have 4 petals. The seeds are flattened capsules.