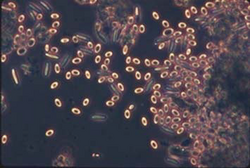 This microsporidian has been described from the red imported fire ant, Solenopsis invicta, in Brazil. It can also infect other species of Solenopsis, but not other genera of ants (Porter et al., 2007). V. invictae infections can be found in larvae, pupae and adult stages of the fire ants. In different surveys in South America, a high proportion of ant colonies have been found infected by the pathogens, and it is regarded as a useful biological control agent of pest fire ants.