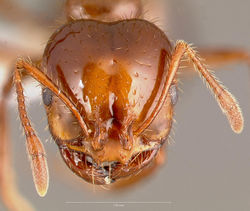 The ant is native in South America and was introduced into North America in the 1930's where it has become a major pest. It is also recorded from Australia (since 2001), Taiwan (2003) and China (2004). This species may form hybrids with Solenopsis richteri.

It can cause direct damage to seeds of crops (e.g. wheat, maize and sorghum) and protects some pests (e.g. certain mealybugs) from predators. The mounds interfer with the operation of farm machinery and people (as well as livestock) suffer from the painful stings of the ant. Various chemical and cultural control methods have been developed and efforts have been made to introduce natural enemies like parasitoids and diseases into North America. Damage by this species is estimated at billions of dollars annually.

The ant has also been reported as a natural enemy of some pest species, e.g. Lepidoptera and Diptera.