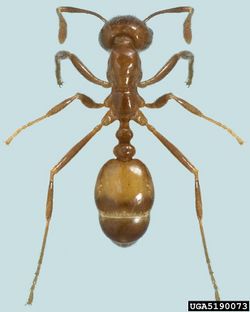 The ant is native to South America and has invaded North America around 1918. It developed into an aggressive pest, but has been largely replaced in many areas by Solenopsis invicta which invaded North America about 20 years later. Its natural habitat is open grassland. Apart from being a nuisance pest which can inflict painful bites, it is also an efficient insect predator. It is closely related to S. invicta and both species can interbreed.