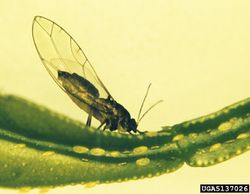 The psyllid infests citrus in some parts of Africa, producing galls on the leaves. It is a vector of the African form of the citrus greening disease, caused by Candidatus Liberibacter africanus. The psyllid is found mainly in southern and central parts of Africa and has been also recorded from several locations in the surrounding regions like the Near East, Canary and Madeira islands and since 2014 from the Iberian Peninsula (Cocuzza et al. 2017). However, the citrus greening bacterium is not found in some of these areas. The psyllid has also been reported to be able to transmit the more destructive Asian form of the citrus greening disease, caused by Candidatus Liberibacter asiaticus. That form is mainly found in Asia as well as the Americas, but also in isolated locations in Africa.

In contrast to Diaphorina citri, the main vector of the Asian form of citrus greening, the nymphs of T. erytreae form protective pits (galls) on the leaves, where they feed. The winged adults are slight more than 2 mm long. They are initially pale green with black eyes and later turn brown.