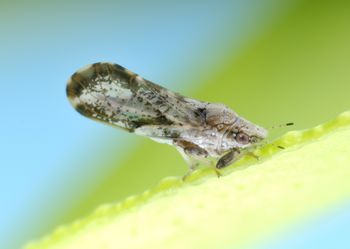 This psyllid is native in parts of south-eastern Asia, but has spread to various other regions. For example, it has been recorded from North America since 1998. The distribution now includes most tropical and subtropical parts of Asia and America.

It feeds on the young developing shoots of citrus trees (and some other crops). The feeding activities reduce growth and promote sooty molds. However, more damaging is its ability to transmit the destructive citrus greening bacterium, “Candidatus Liberibacter asiaticus”. The psyllids acquire the bacterium for life and can even pass it on to their offspring. The rate of psyllids carrying Liberibacter asiaticus might approach 100% in some populations, but the bacterial load per insect varies widely, apparently depending on the season (Coy and Stelinski, 2015, Ukuda-Hosokawa et al., 2015). Management currently relies on the use of insecticides.

The psyllid mainly spreads through infested citrus plants. In addition, citrus leaves of certain varieties are marketed for medicinal and culinary purposes and are also a risk of dispersing the pest.

The adults are about 4 mm long and mottled with brown. Typically, they form an angle of about 45° with the leaf surface during feeding. The life-cycle from egg, through 5 nymphal stages, to mature adult lasts around 1 month.