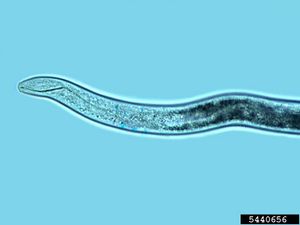 This family of nematodes is widely distributed and contains more than 100 species. Several of them are important plant parasites and virus vectors like the stubby root nematode Paratrichodorus minor. They feed on the root tips, causing stunting of the roots (stubby root symptoms). Among the many crops attacked are maize, sugarcane, potatoes and grasses.

The main morphological feature of the family is the spear, called onchiostyle, which is not hollow but has a groove along which the cell content appears to be channeled during feeding.