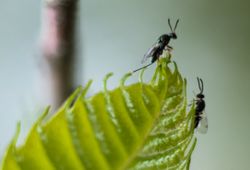 T. sinensis is a parasitoid of the chestnut gall wasp Dryocosmus kuriphilus, an invasive pest in various countries of Asia, North America and Europe. The parasitoid has been successfully released against the gall wasp in Japan (1975), U.S.A. (late 1970s), Italy (starting 2009) and other countries, suppressing the pest populations effectively to acceptable levels.

The female parasitoid lays eggs into newly formed galls, typically one per host larva. After hatching, the parasitoid larva feeds externally on the mature host larva. It normally pupates during the winter and new adults emerge during spring. However, in Italy the larvae go into diapause for one year and adults emerge the following year.