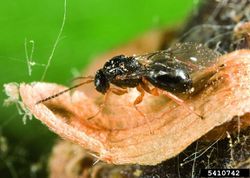 This wasp is native to parts of eastern Asia and has invaded other regions around the world becoming an important pest of chestnut trees. It spreads through infested chestnut plants and has reached Japan (first record 1940), North America (1974) and Europe (2002).

It attacks the buds and converts them into galls, causing nut losses of more than 50% at high population levels (Battisti et al., 2014). Up to 2 cm long, green galls are formed and the adults emerge in late spring or early summer. The application of pesticides has little effect and the development of biological control methods is being explored.

The adults are 2½-3 mm long, black with brownish legs. Only females are known which reproduce parthenogenetically. There is only 1 generation per year and eggs are laid into the buds in the summer. After hatching from the eggs, the young larvae overwinter on the trees and continue their development the following spring.