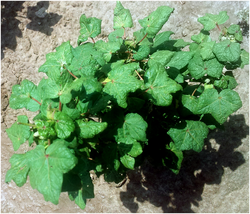 This virus infects tomatoes, other solanaceous crops like potatoes, as well as other crops like cucurbits and cotton. It was originally described from India (in 1995) and has been subsequently found in other countries in southern Asia. It current distribution in Asia spans from Iran to Taiwan. Since 2012, a novel strain of ToLCNDV has been reported from Spain which has since spread to neighbouring countries like Tunsia and Italy (e.g. see Fortes et al. 2016).

Symptoms on tomatoes are similar to those caused by other tomato leaf curl viruses and include yellowing, vein clearing, severe leaf curling, twisting of stems and stunting. On cucurbits, symptoms have been described as leaf curling, vein swelling, and severe mosaic in young leaves, short internodes, and fruit skin roughness. Yield losses can be severe, e.g. on cucurbits in Spain. The 2 circular and single-stranded DNA genomes have a size of about 2.7 kb.