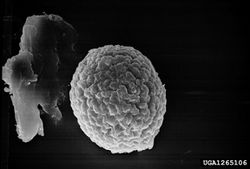 The fungus affects wheat and some other cereals in India, neighbouring countries and Africa. It has been found also in North and Central America since 1996. The disease is named after the town Karnal in northern India from where it was first described in 1931. Infections reduce the grain quality, causing a discolouration and unpleasant odour, also to grain products. Yield losses are typically small, but may reach 20%. Wheat grain with more than 3% bunted kernels is regarded as unfit for human consumption.

The teliospores persist on seeds and in the soil. They spread mainly through contaminated seeds and farming tools. Under laboratory conditions the teliospores have been reported to survive for at least 16 years. The infections occur mainly during the flowering or grain filling stage of the host plant and result in the development of masses of dark brown spores at the embryo end of the kernels.

Management of the disease involves mainly cultural methods, fungicides and the use of resistant cultivars.