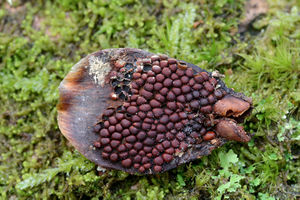 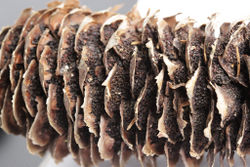 fruiting bodies of Pucciniastrum areolatum (= Thekopsora areolata) on cone of Picea abies (click on image to enlarge it)
Source: Flickr

This rust species is found in Europe as well as in temperate and subtropical parts of Asia. There is also a record from the Caribbean. It is of quarantine concern in North America. The fungus infects spruce cones (Picea) forming aecia and Prunus leaves forming telia. The infection prevents the normal development of the cones and in some countries, it results in significant losses in Norway spruce (Picea abies) seed orchards.

The 2-year life cycle of the fungus starts with overwintering teliospores forming basidiospores that infect spruce female flowers in spring and produce pycnia. Eventually aecia develop on the inner surfaces of the spruce cone scales. During spring the following year, the aeciospores disperse and infect Prunus leaves, forming uredia (e.g. see Kaitera et al., 2014). Telia and teliospores develop on the fallen leaves during the winter.