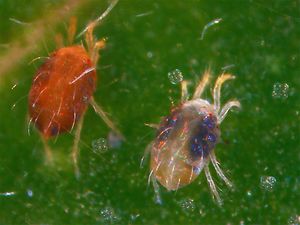 The mite infests mainly Solanaceae crops like tomatoes and egg plants, but can be also found on other plants. It appears to be native to South America, but is now widely distributed, including the warmer parts of Europe (since 1995) and Asia as well as in Africa (Boubou et al., 2011). Infested leaves become chlorotic and the damage can be substantial. Yield losses on tomato can exceed 50%.

The female adult is about 0.5 mm long and orange to red with yellowish legs. The males are smaller and lighter orange. Apart from using morphological characters, the identification should be confirmed by DNA analysis. The development from egg, larval stage, 2 nymphal stages, to mature adult lasts about 2 weeks. Pesticides have been used for control, but problems with the development of resistance were encountered. Trials with botanicals and lime sulphur have given promising results.