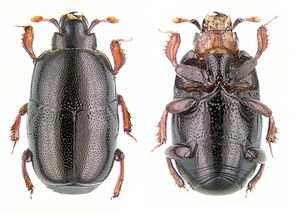 This beetle is a predator of the larger grain borer (Prostephanus truncatus) and other stored product insects. It has been introduced into West Africa from Central America in the 1990s as a biological control agent against P. truncatus. It was later also released in eastern Africa. In some areas, the beetles was able to suppress the populations of the larger grain borer, but not in others. The adults are around 5 mm long and shiny black.