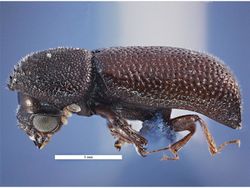 Losses of up to or exceeding 30% have been reported after 6 months of storage of maize and cassava. Infestations may already start on mature cobs in the field and can then be introduced into stores after harvest. Adults can fly over short distances but most dispersal occurs through human transport of grain and P. truncatus can be occasionally found in maize shipments.

The female lays eggs into maize seeds and plugs the opening. The larva develops inside the kernel and the development from egg to mature adult lasts around 1 month. Several larvae can complete their development in a single grain. P. truncatus is adapted to a dry environment and can still survive in maize grains with 10% moisture.

Management involves storage of maize under cool and dry conditions, as well as fumigation. For small-scale maize production, harvesting as soon as cobs are mature is recommended, as well as careful cleaning of stores, burning of infested residues and avoiding long storage periods.

The histerid predatory beetle Teretrius nigrescens has been introduced from Central America into Africa in the 1990s. After the establishment and spread of the predator a decrease in P. truncatus infestations was observed in some areas.

The adult is dark brown and approximately 3-4 mm large. The pronotum is curved in front and the head directed downwards. The antenna has 10 segments, including a 3-segmented terminal club.

For a review see Farrell and Schulten, 2002.