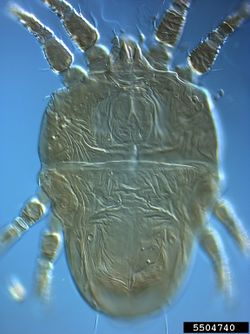 This genus of plant feeding mites is widely distributed and contains more than 300 species. A number of species are considered to be agricultural pests. These are found mainly in tropical and subtropical regions. For example, Tenuipalpus heveae is an important pest of rubber trees in South America.

Tenuipalpus has been characterized as having a broad prodosoma (cephalothorax) and a narrow opisthosoma (posterior part of the body). However, this very simple definition has resulted in many species being assigned to this genus. Tenuipalpus sensu stricto has been described as having a pair of lateral body projections associated with setae c3 (Castro et al., 2016).