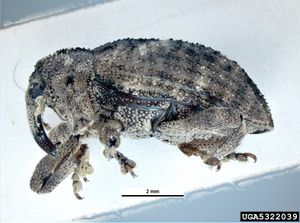 This genus of weevils is closely related to the genus Cryptorhynchus (e.g. see Cryptorhynchus lapathi). Several species are common in the Asian and Australian regions infesting mango fruits. The mango seed weevil, Sternochetus mangiferae, is believed to be native to Australia, but has spread to various mango growing regions around the world. It is a quarantine pest in some countries like in southern Europe and the U.S.