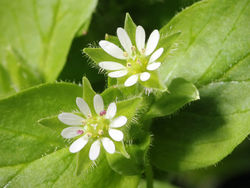 This is a common weed in Europe and North America which tolerates a large variety of environmental conditions like different climates or soil types. The weed grows quickly and can compete with cereals and many other crops like beets, soybean or Brassica crops. It can form dense mats. Yield losses of more than 50% have been reported for some cereals. In addition, it is also a reservoir for several plant viruses infecting crops (e.g. the Tomato spotted wilt virus). On the other hand, the weed is readily eaten by chicken and other animals. The young leaves can be also used for salads.

An individual plant can produce several thousand small seeds. These disperse through birds, water or human activities. They persist for several years in the soil. In crops, the weed is usually controlled with herbicides before it flowers. Tillage and soil solarization are alternatives.

Plants usually grow to a height of 5-10 cm. They have pointed leaves and hairy stems. The flowers are small (about 5 mm wide) have 5 white petals which are deeply divided and give the appearance of 10 petals. The flowers are usually self-pollinated, rarely cross-pollinated. The tiny seeds (less than 1 mm large) are produced in capsules.