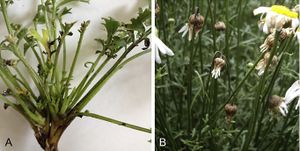 This fungus causes ray blight of pyrethrum (chrysanthemums) in Australia. It was first reported in 1995 and caused large-scale epidemics in 1999, typically reducing yields by 50% or more. The symptoms include necrosis of the leaf margins, shoots and developing buds. In addition, the flower stems can develop shepherd crook symptoms. The fungus reproduces asexually in Australia.