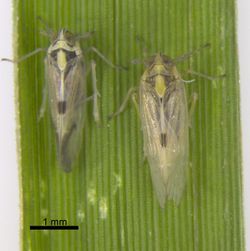 The planthopper is an important, migrating pest of rice in eastern Asia. Feeding damage leads to yellowing ("hopper burn"), wilting and stunting, reduced grain production as well as brown ear symptoms and rusty or black-cracked kernels. Heavily infested plants might die. S. furcifera transmits the Rice black streaked dwarf virus and the Southern rice black-streaked dwarf virus in a persistent and propagative manner. After acquiring the viruses the hoppers stay infective for life, but do not pass them on to the eggs. The development from egg, through 5 nymphal stages, to mature adult lasts around 3-4 weeks. Insecticides are mainly used for management. However, in some areas about a third of the hoppers have moderate resistance against commonly used pesticides.

The adult is 2½-3 mm long and light brown to black. The pronotum and middle of the mesonotum are whitish. The females have 2 forms, the brachypterous (short-winged) females cannot fly, but lay more eggs and cause more damage. The macropterous (long-winged) females and the males can migrate over long distances (e.g from China to Japan) and are predominantly produced when rice plants become mature. The forewings have a characteristic dark brown mark at the tip of the clavus.