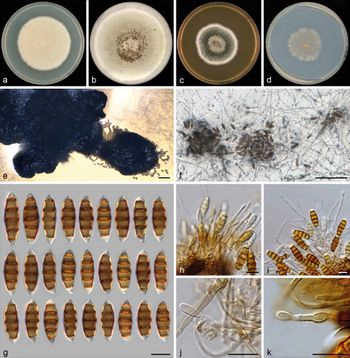 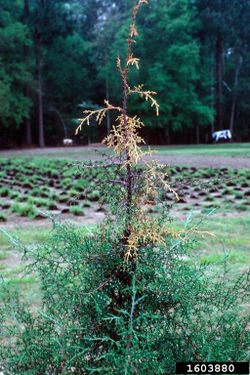 This fungus causes bark canker and blight on different cypress species, often resulting in tree death. The pathogen enters the host through small wounds and affected branches die off. The disease was first described from California in 1929 and appears to be native to North America. It has spread to many parts of the world like the Mediterrenean and East Africa, causing destructive outbreaks (e.g. see Danti et al., 2014 or Graniti, 1998).

S. cardinale is now found in different parts of Europe, Africa, Asia and South America, as well as in Australia and New Zealand. Species of Cupressus are highly susceptible. Related conifers may also become infected like Cupressocyparis or Juniperus species.

The conidia of S. cardinale are fusiform, straight or slightly curved, with 5 septa and two short appendages. They are around 20-25 µm long and 8-9 µm wide.