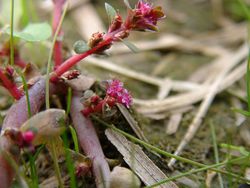 This species is native to southern parts of Asia, but has spread to other regions. It is a weed of rice fields in its native range as well as in some areas where it was introduced. Several forms exist, some grow submerged in water and are used as aquarium plants, while others grow out of the water.