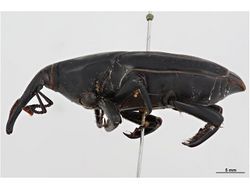 This weevil is found in Central and South America, where it attacks different types of palm trees, including coconut and oil palm. Since 2011, it has been also reported from southern parts of the U.S.A. (Hoddle et al., 2020, and Esparza-Díaz et al., 2013). R. palmarum breed in the upper (youngest) part of the palm trunk and the larvae often destroy the growing point, killing the tree. In addition, it can transmit the lethal red ring disease. Especially palms are vulnerable which are wounded near the upper trunk.

There are 6 to 10 larval stages and the development from egg to adult last around 2 months. The adults are black and about 4-5 cm long, they will live for up to 2 months.