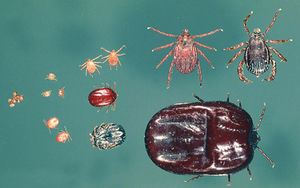 The tick infests livestock in Africa and transmits the protozoan, Theileria parva, the causative agent of East Coast fever. This is the most important, tick-borne disease agent of cattle in sub-Saharan Africa and results in high rates of mortality and morbidity.

The tick is widely distributed in Africa and the Near East and common in eastern Africa. It has a three-host life cycle and adults mainly infests the ears of cattle and buffalo. Immature stages are found on smaller mammals. They feed on their hosts for a few days then drop to the ground and continue their development.