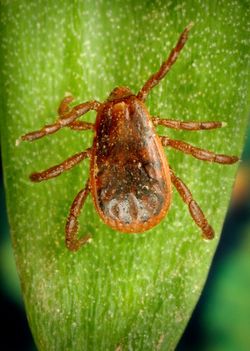 The genus of ticks contains around 75 species, many of which are found in Africa. It includes several important pests of domestic animals and livestock. In livestock, infestation with 10 or more ticks causes enough blood loss to weaken the animal. Some species transmit serious diseases to humans, livestock and domestic animals. Management involves the use of chemical treatments. Cattle like Bos indicus have a natural resistance to Rhipicephalus ticks.

The species are medium-sized ticks, 3-5 mm long (unfed). The genus has many similarities to the genus Haemaphysalis and both are mainly distinguished by the shape of the capitulum, the moveable anterior part of the body including the mouth parts. The subgenus Boophilus has been considered to be a separate genus by some authors.

Economically, the most important species are: