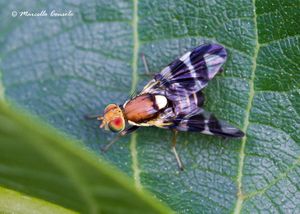 This fruit fly is native to central parts of North America, but has spread to California around 1926 and to Europe (first record in Switzerland in 1988). It has since spread to many other parts of Europe by adult dissemination and hitchhiker behaviour. It attacks walnuts and the larvae breed in the husks. As a result, the nuts to not mature properly and yield losses can reach 80%.

The mature larvae drop to the ground and pupate in the soil. Typically, the young adults emerge during the next season in a synchronised manner when the walnut fruits are becoming ripe. However, a portion of the population goes through a dormancy which might last several years.

The adults are around 8-10 mm long, brownish with parts of the body whitish and black wing markings. The species is closely related to another North American walnut fruit fly, Rhagoletis suavis, and was previously regarded as a subspecies of R. suavis.