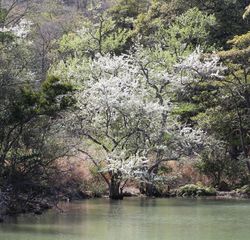 Callery pear was introduced from China into North America in the early 1900s, initially as a source of resistance to fire blight because it could be crossed with cultivated pear (Pyrus communis). Later, it was also widely planted as an ornamental. It is now very common and invasive in many eastern parts of North America, especially in woodlands. It can form dense, thorny thickets.

The tree usually grows to a height of 6-8 m, with ovate to elliptical leaves, and often with thorny branches. However, thornless cultivars are also grown. It spreads mainly via seeds that are carried by birds.