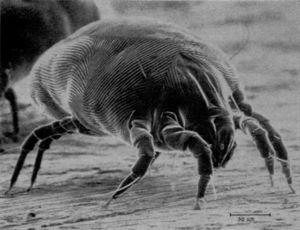 Most of the mites in the family of Pyroglyphidae are found in bird nests where they feed on organic matters. A number of species live in houses and are called house dust mites. They are important pests which can cause allergies after "sensitization" which means people become more sensitive to the allergen after repeated exposure.

In Europe it has been estimated that between 20 to 40% of the population can become allergic to the mites. The threshold for "sensitization" is around 10 mites per g of floor dust or 100 mites per g of mattress or upholstery dust. Persons having acquired an allergy against house dust mites can experience intense and burning itching as well as a red rash.

Taxonomically the Pyroglyphidae are characterized by the position and size of the hairs on body and legs, by the shape of the legs as well as by the structure of the cuticle and genitalia.

The following genera and individual species are currently entered under this family: