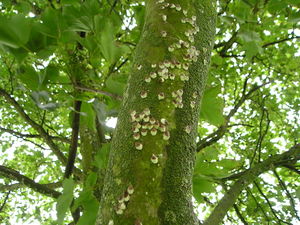 Pulvinaria regalis on a sycamore trunk (click on image to enlarge it)
Source: Wikimedia Commons

This scale insect was originally described from Tilia vulgaris in Paris in 1968. It has since been reported from other European countries and can reach high population densities. It is polyphagous, but lime trees, horse-chestnut and maple are most frequently attacked.

There is one generation per year with females laying eggs in late spring, covered by woolly ovisacs. The crawlers move to the leaves, where they feed until autumn. In autumn, the third-instar nymphs move to the branches and trunk for overwintering. Development continues and is completed in spring.