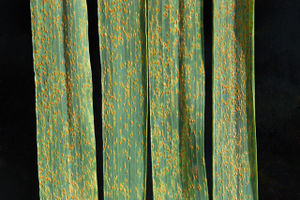 The fungus is a specialized and windborne pathogen of wheat and triticale, which can be found wherever wheat is grown. It can cause serious epidemics, depending on the races of the fungus present in an area and the susceptibility of the planted wheat cultivars to these races. Yield losses of up to 20% have been estimated. Many races have been described with new ones appearing frequently. Since planting resistant cultivars is the most practical management option, breeding for resistance is a continous effort.

Uredinia are formed on both leaf sides. They are 1-2 mm large and orange-brown. The urediniospores are nearly spherical with a spiny surface. They disperse through the air (sometimes over hundreds of kilometers) and infect other wheat plants.

At a later stage teliospores may be formed in some uredinia. They are brown-black, club-shaped, have 2 cells and a smooth surface. They also disperse through the air and can initiate sexual reproduction on an alternate host (Thalictrum or Isopyrum). However, asexual reproduction on wheat can also continue indefinitely as long as wheat plants are available (e.g. as winter wheat or volunteer wheat). Teliospores are approximately 46 x 16 µm large, basidiospores 8 x 6, pycniospores 4 x 2, aeciospores 20 x 17 and urediniospores 23 x 20 µm.