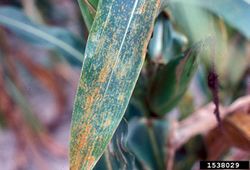 The fungus causes an important rust disease of maize in tropical regions. It is less common in temperate countries where the obligatory intermediate hosts (Oxalis species) are usually not sufficiently abundant. The elongated urediosori are formed on the leaves, these turn dark brown when spores are released.