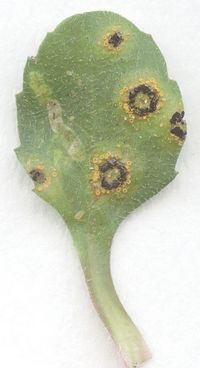 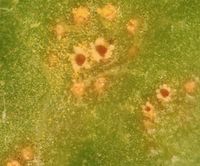 This rust fungus is widely distributed and infects a variety of ornamental plants from the family Asteraceae. On daisies it has been often reported under the synonym Puccinia distincta. Also the weed Senecio vulgaris becomes infected where the fungus is considered to be a beneficial biological control agent (see Puccinia lagenophorae as a weed pathogen).

No urediniospores are produced (demicyclic) and aecia and telia can be formed on the same host. The aecia are yellow to orange and the aeciospores are nearly spherical with a size of around 15 x 12 µm. The telia a black and the two-celled teliospores, reddish brown, with a size of 40-50 x 20-25 µm.