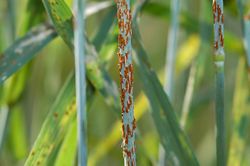 The fungus causes a serious rust disease which attacks wheat, rye, barley, oat and some grasses. It has a world-wide distribution and can result in serious losses. Fields may be completely destroyed and yield losses of more than 50% have been recorded over larger areas. Stem rust is characterized by the elongated, brown or black spore pockets, which are found on the stems, leaf sheaths and spikes. The spores disperse through the wind and epidemics develop during warm conditions when leaves are frequently wetted by rain or dew.

The presence of the alternate host of the fungus (mainly barberry like Berberis vulgaris) can be also important for the development of epidemics. Effective control can be achieved when this secondary host is eliminated. Most wheat cultivars grown today are resistant against the fungus. However, virulent, resistance breaking races of the fungus (e.g. race Ug99) can still cause serious outbreaks.

Asexually produced urediniospores are the most common spore type causing infections on cereals. They are brick-red, approximately 28 x 18 µm large and covered with spines. They spread the disease within the cereal host, e.g. from an infected plant to a neighbouring plant. Near the end of the season, the fungus forms black teliospores. These are club-shaped, have 2 cells, a thick wall and are about 50 x 20 µm in size.

The teliospores overwinter and germinate in the spring when they produce basidiospores, about 10 x 6-7 µm large. The basidiospores infect the alternate host (typically barberry) where the fungus undergoes a sexual reproduction cycle during which pycniospores (around 4 x 2 µm large) and later aeciospores (~21 x 18 µm) are produced. The aeciospores again infect the cereal host. If winter wheat is planted the fungus can survive all year round through the asexual production of urediniospores. These infect the crop as well as volunteer wheat plants during the rest of the year.