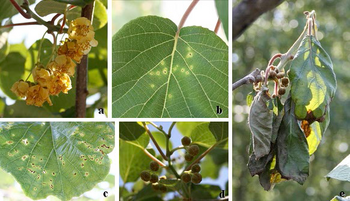 This pathovar causes bacterial canker of green (Actinidia deliciosa) and yellow (Actinidia chinensis) fleshed kiwifruit. It first appeared in Japan and subsequently spread to other countries and regions. In Europe it is now wide-spread in kiwi growing areas, e.g. in Italy (first record 1992), Spain, Portugal and France.

The symptoms include brown leaf spots with chlorotic haloes, brown discoloration of buds, cankers with exudates on trunks and twigs, and collapsed fruits. Since the first outbreak in Japan in the late 1980s, this pathogen has caused severe economic losses in kiwi producing countries, for example in Italy and New Zealand. Estimates in 2012 predicted that the disease will cause losses of up to NZ$410 million over the coming 5 years in New Zealand alone. There is evidence that the disease is transmitted by honey bees (Pattemore et al., 2014).

So far, chemical control has had limited success. Recommended cultural control methods include the removal of unnecessary growth within leader zones, minimizing the size and number of wounds, providing protective cover of wounds and destruction of any apparently diseased material. Breeding programs aimed at developing resistant germplasm have started but need to take into account the presences of several strains which differ in their virulence and the toxins produced.

For details see Cameron and Sarojini, 2014. The page Pseudomonas syringae gives a general overview of the biology of this bacterium.