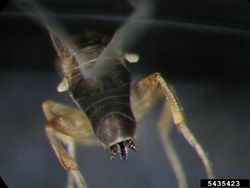 The fly is a parasitoid of the red imported fire ant, Solenopsis invicta, in South America. The larva decapitates its living host and uses the ants empty head capsule as its pupal case. It has been introduced into North America starting 1997 as part of a biological control program against the fire ant.

Parasitation rates have remained low (< 3%) after its introduction, similar to those in its native range. Moreover, most workers parasitized are apparently near the end of their lives, resulting in a small overall impact of the parasitoid on ant populations. However, a greater impact of the flies could be a disruption of the foraging behaviour of the ants. In the presence to the parasitoid, the fire ants show a defensive behaviour in order to reduce their exposure to the flies.