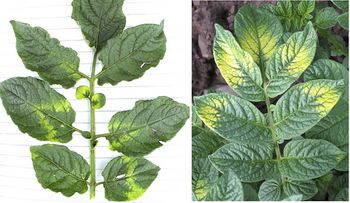 EM image of potato mop-top virus particles. The gold-labeling shows the binding to the CP readthrough protein, at one extremity of the particles. The bar represents 100 nm. (click on image to enlarge it)
Author(s): I.M. Roberts
Source: ICTV reports

The virus infects potato and is found in all potato-growing regions. It is common in cool and wet areas. Its origin is suspected to be South America. The virus is economically important in some areas, especially on seed potatoes, and reduces yield and crop quality. Infected plants show “mop-top” stunting and yellow areas on the leaves. Symptoms on potato tubers are described as “spraing” and consist of rust coloured spots, rings and arcs. Tuber with these symptoms are unmarketable.

The virus is transmitted by the soil-borne fungus Spongospora subterranea which also causes potato powdery scab. The virus can persist in the fungus for several years. It can be also transmitted by planting infected tubers and by grafting. Control relies mainly on the use of disease-free seed tubers. All commercial potato cultivars are susceptible to the disease.

PMTV is the type member of the genus Pomovirus. It has rod-shaped particles about 100-300 x 20 nm in size and a genome of 3 positive-sensed, single-stranded RNA molecules.