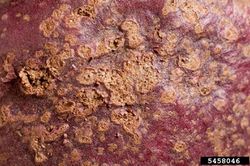 The species is a soil-borne slime mold with a world-wide distribution which causes powdery scab of potato. Resting spores in the soil germinate in the presence of water and release zoospores which invade roots and tubers. Roots develop root galls. On infected tubers, corky, sunken surface lesions appear with the skin breaking and exposing masses of spores. The infected tubers are not marketable and rot easily, the yield is also reduced. It is further a vector of the Potato mop-top virus (PMTV).

Long distance spread is mainly through infected tubers, the origin of the disease may be South America. It now has a world-wide distribution. Short distance spread occurs through contaminated farm equipment or other soil movement. The resting spores persist in the soil for up to 10 years. Management involves the use of disease-free tubers, planting other crops for at least 5 years, and using resistant cultivars. Fungicide applications are usually not economical.

The resting spores are approximately 4 µm in diameter and are formed in spore balls containing 50-100 spores. Each spore releases a mobile, biflagellate zoospore. Zoospores with 4 flagella have been also observed and have been suspected to be the result of two zoospores fusing as part of a sexual reproduction cycle.