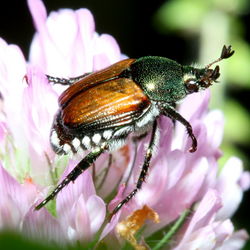 The scarab beetle is native to temperate regions of eastern Asia and has been introduced into North America (first record in 1916). It is common in the north-eastern parts of the U.S.A. and is still spreading westwards (there are quarantine restrictions in some states). The Japanese beetle has been also introduced into the Azores (Portugal) in the early 1970s and has been reported from northern Italy since 2014 (Anonymous, 2016). The adults are gregarious and highly polyphagous, feeding on the leaves (also flowers and fruits) of many crops and often causing defoliation. Among others, maize, soybean, stonefruits and various forest and park trees are attacked.

The larvae (white grubs) feed on the roots of grasses and crops. Some crops like maize are attacked by both adults (leaves and silk) as well as larvae (roots). Annual costs for control operations have been estimated at US$ 450 million in 2002. There is one generation per year. Females typically start egg-laying in early summer, preferring healthy turfgrass. The larvae and pupae spent about 10 months in the soil with third instar larvae going into diapause during the winter. Adults start emerging from the soil in late spring.

Vane traps are useful for monitoring adult beetle densities. Hand removal is recommended for small infestations and in gardens. Apart from insecticides, there are several effective biological control agents which are available commercially like Paenibacillus popilliae, Bacillus thuringiensis var. japonensis or different species of entomopathogenic nematodes (e.g. Steinernema glaseri or Heterorhabditis bacteriophora). The economic thresholds for intervention are considered to be 30% defoliation for soybean and 3 beetles per ear for maize.

The adults are around 1 cm long, metallic green with bronze-coloured elytra. There are 5 tufts of white hair along each side of the abdomen, with an additional pair of white marks at the end. Both sexes have the same colour pattern, but males are slightly smaller than females.