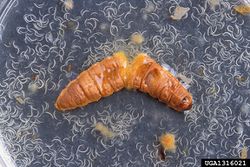 H. bacteriophora contains the mutualistic and pathogenic bacterium Photorhabdus luminescens (syn. Xenorhabdus luminescens) in its gut. The bacteria are released by the nematode into the haemocoel of the host, causing insect death within 1-2 days. P. luminescens is by itself of interest as an entomopathogen and can be grown on artificial media. It produces a number of toxins.