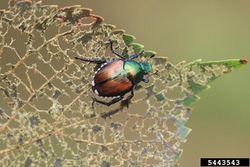 The genus contains around 300 species of scarab beetles, including several pest species. The larvae are grubs which live in the soil and feed on roots while the adults feed on leaves and can also cause substantial damage. The adults are typically between 10 and 15 mm long. Many species are found in Asia. The Japanese beetle, Popillia japonica, is the most important pest and has been accidentally introduced into North America. It is polyphageous and both the larvae, feeding mainly on grasses, and the adults can cause substantial damage.