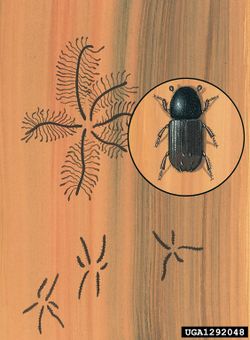 This genus of bark beetles contains around 40 species which are found in Europe and North America. Mainly conifers like pines and spruce are attacked, the majority of which are weakened, dying or recently killed trees. When the beetles have developed in larger numbers, there can be mass attacks on young trees near the breeding source, causing occasionally tree death. The galleries under the bark radiate in a star-like manner.

The adults are 1½ to 3½ mm long and compact with an evenly rounded pronotum which contains some knobs in the front part. The declivity on the elytra is characteristic for the genus. It is equipped with strong teeth in males and with shorter teeth or knobs in females. Females also have a pit in the frontal region of the head.