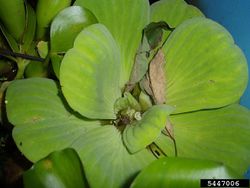 This is a floating aquatic weed and an aggressive invader of slow moving waters in the tropics and subtropics. The weed is of Neotropical origin but now has a world-wide distribution. It blocks waterways, reduces fish populations by depleting the water oxygen and affects rice crops.

It is sold as an aquarium plant in many countries and after such plants are discarded they find their way into the water bodies. However, the plants are sensitive to frost and cannot overwinter in temperate countries.