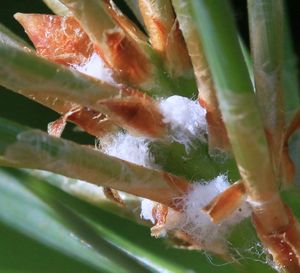 This genus contains around 20 species of adelgids that are found on conifers, mainly in the northern hemisphere. Some species have spread to other regions like Pineus pini from Europe to eastern Africa.

Like for other adelgids, galls are formed on spruce trees, the primary hosts. Pine trees are common secondary host, where the wingless adults are covered with dense wax filaments. However, some species live and reproduce only on one type of host plant, that is either on pine trees or on spruce. Serious damage including outbreaks and tree death may be caused on pine trees by some species.

The genus Pineus is very similar to the genus Adelges in morphology and biology. The main morphological difference is the presence of only 4 pairs of abdominal spiracles (5 in Adelges).