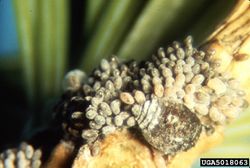 The family includes about 50 species of small aphid-like insects which live on conifers and produce a dense woolly wax cover. They belong to the superfamily of Phylloxeroidea. Unlike the true aphids they never give birth to live nymphs and don‘t have siphunculi or cauda.

The adelgids have a complex life cycle usually lasting 2 years and typically requiring 2 hosts. The primary host is always a species of Picea on which galls are produced. The secondary hosts are other conifer species on which no galls are induced. The life cycle starts with the wingless "sexuales" on Picea which lay eggs in autumn from which the wingless "fundatrices" hatch. These overwinter and lay eggs parthenogenetically from which the "gallicolae" hatch. These produce the characteristic galls. Within the galls the gallicolae can develop into wingless forms which produce further fundatrices or into winged migrant forms which fly to the secondary host. On the secondary host also different forms are produced, depending on the species. These include overwintering "sistens" which in turn produce either wingless "progrediens" or winged "sexuparae". The latter fly back to the primary host. All forms, except the sexuales reproduce parthenogenetically.

The following genera and individual species are currently entered under Adelgidae: