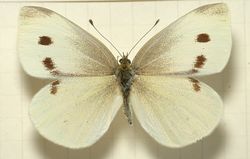 This family contains around 2,000 species, including some of the most common butterflies. Several are important agricultural pests like Pieris rapae or Pieris brassicae. Crucifers are common hosts of the caterpillars.

The adults are mostly of medium size and usually either white, yellow or orange marked with black. The pupae are positioned upright, resting on the hind end and held by a central silken band attached to the substrate. The caterpillars are rather elongated. The family is closely related to the Nymphalidae but the adults have functional fore legs. Other characters of the family include the antennae which are half as long as forewings with a small club at the end. The labial palps are longer than the head and point upwards.

The following genera and individual species are currently entered in the system: